I am Alejandro Santiago, co-founder of Tochas Studios. Main, and only programmer, in the team.
It took us three years to make SodaCity, our latest and biggest project so far, during that time we missed a few things, broke some others, overall learned a few tricks here and there. In this blog I will try to elaborate on those findings so anyone that stumbles upon this posts can learn a few things from us too and avoid the downsides.

As I am the 'tech' guy in the team most of my posts will cover technical topics.

In this first post I will address a small trick I came to find regarding the use of coroutines in Unity3d.

The Coroutines in Unity offer great advantages for building complex behaviors and it use can span from a couple of objects to thousands as they can be used for AI agents, fade effects, motion controllers, bullets, particles, UI components, etc.

Guides on how to use coroutines and even nested coroutines are common, easy to find and digest.

But in all references I came across the same principle was applied.

Yielding a new YieldInstruction every time a delay or pause in the coroutine execution is needed.

As the coroutine can be executed every frame or multiple times per second and the behavior can be attached to multiple objects (ex. Bullets or Enemies) this can potentially cause several even thousand of YieldInstructions to be created each frame.

This poses a problem with the GC, as we all know the GC can cause jitters and heavy frame drops each time it does its thing.

To avoid the GC problem it is recommended to pool objects. with almost every optimization guide I came across they referred to it as GameObject pooling. But I never came across a YieldInstruction pooling.

As SodaCity code grew in size and complexity each build was using more and more coroutines within more and more behaviors and objects. That had me worried as this could cause problems in the long run, So I decided to try to cache YieldInstruction objects and see what happened.

The results are as follows

Yes! You can and should pool or cache your YieldInstruction objects.

As all of the yielders provided by Unity do not expose members to allow changing values of already created objects, simply caching the references and reusing them at the instance level wouldn't do the trick (for most cases).

The solution I am proposing is to use a generic Dictionary within a Yielders static class to allow cache and reuse of yielder objects at the application/game level.

This allows to globally pre-cache a single WaitForEndOfFrame and a single WaitForFixedUpdate object ready to be used by any coroutine in any object, even simultaneously.

To validate this theory and measure the real gains or losses for each method I made a small test project. It can be downloaded from here.

To see details on the tests performed, continue reading...

These tests were made with Unity 4.3

The scene is simple, it has a camera and 12 spawners, this will instantiate prefabs that use Coroutines to increase the load and catch alloc and cpu spikes while profiling. 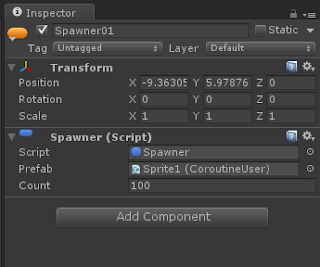 To create a few dynamism within the test there are three prefabs. 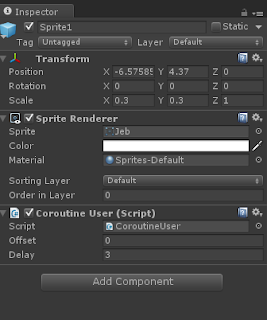 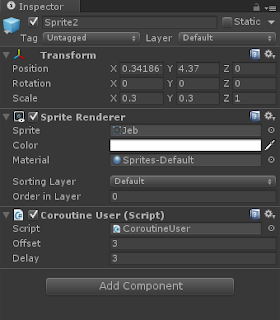 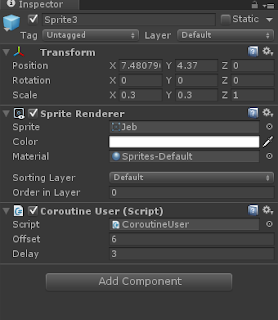 Each CoroutineUser has a sprite component attached and will change its color every "Delay" seconds.

With the use of preprocessor symbols we can change the test to be run, thus only changing the lines corresponding with the "Wait" part of the process.

When run, the screen will be "mostly" covered by the same sprite, starting all with white tint and every "x" seconds a row will switch colors. 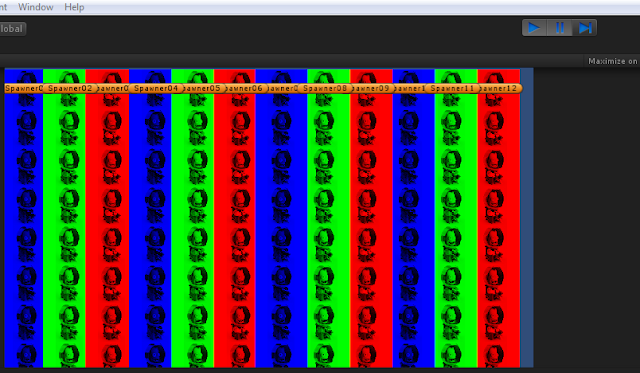 Note: I do recommend to disable VSync to be able to spot more easily the cpu spikes at the profiler.
Edit->Project->Quality

Creating new Yielders will cause allocs on the frame the instruction was created, and it will be disposed right after the yield statement has finished thus generating GC calls every once in a while.

As can be seen in the profiler window, the 1200 calls to CoroutineUser.Start.Iterator.MoveNext() will cause allocs of 14.1KB and 1200 WaitForSeconds..ctor() can be seen within the stack hierarchy.

Caching the YieldInstructions within a static dictionary will cause allocs the first frame the Yielder is needed and subsequently will reuse those objects.
Having a strong reference to those objects will keep them away from the GC and can be purged at will ensuring GC calls to be made in safe zones, like before/after Application.LoadLevelAsync for example.

In the profiler window can be seen the 1200 calls to CoroutineUser.Start.Iterator.MoveNext() and the 0KB allocs.
also no .ctor() can be seen within the stack hierarchy.

Starting a new "nested" Coroutine within a Coroutine (Coroutineception!) as powerful as it can be is a double edged sword and must be used carefully. This will create a new Coroutine object and all the overhead Unity needs to do to handle a new Coroutine.

As can be seen at this profiler window, each frame the 1200 CoroutineUser objects need to wait will cause allocs of 57.4KB, Iterator<WaitRoutine>..ctor() can be seen within the stack hierarchy.
due to the size of the allocs this method will cause GC calls to be more often.

The standard new WaitForSeconds() method it is not so bad, causing about 0.01175KB of garbage per YieldInstruction.

Caching YieldInstructions as exposed at the beginning of the post can help reduce the GC load.

In "not-so-"extreme environments saving a few KB here and there can be helpful, so caching them globally is appropriate as multiple objects can reuse the same YieldInstruction. Helpful for custom particles and particle engines, spawned objects like bullets, explosions, enemies, making tweens.

Proper handling of the bucket used to cache them is required.
In this case a dictionary do not pose an issue as the key is a float and do not cause issues mostly caused by string keys.
The dictionary size can be constrained and optimized further like, only allowing a certain float precision as the key, self purging stale (unused) objects and so on

I applied this technique to all the Coroutines used by SodaCity code and it heavily improve the game's performance, Allowing us to have more objects on screen and be more bold in the refresh rate of some game sub-systems like AI, depth sorting and custom game particles.

Please feel free to download the test project, run your own tests, make changes and provide feedback.
Leave your findings, questions or doubts in the comments below.